Bermondsey just wants to have fun... at the Bede House Annual Funday!
﻿ 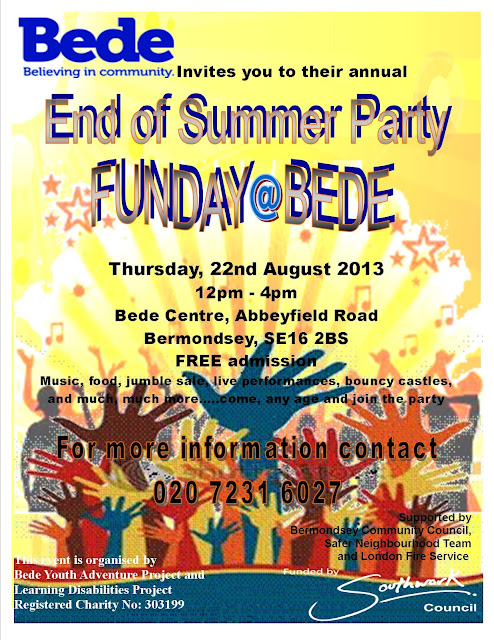 After the recent inspirational exhibition celebrating 75 years of Bede House serving the Bermondsey community, it's time to enjoy their fun day at the Bede Centre on Abbeyfield Road SE16.
With music, food, live performances and much much more, it promises to be the perfect summer party for all the family.
Oh, and if you can support Bede House in anyway, for example as a volunteer or through a donation, they would love to hear from you.
Contact details:
Bede House
Telephone: 020 7237 3881
Website: www.bedehouse.org.uk
Twitter: @bedehouse

Posted by A View from Bermondsey Beach at 20:02 No comments: Links to this post

It's your last chance to see the outstanding National Lottery funded exhibition presented by the local charity Bede House at the  CGP Gallery.  Opening to a rapturous reception on Friday 9th August, there are only two more days to live the lives of our Bermondsey ancestors in glorious black and white photographs - and if you listen carefully, you might hear their voices speaking clearly to us about the present.

Bede House is always looking for support in a variety of ways, including volunteers and donations.  As you read director Nick Dunne describing in words and picturesthe opening gala event, Bermondsey Beach hopes that you will consider lending Bede a hand...
Dear Friends of Bede,
Many thanks to all of you who came to celebrate the opening on Friday evening of the Bede Exhibition “Believing in Community – 75 Years in Bermondsey and Rotherhithe”.

It was a brilliant evening, with nearly 100 people filling the Café Gallery in Southwark Park. The exhibition was opened by the Deputy Mayor of Southwark, Cllr Sunil Chopra. Helping him cut the ribbon were June Morgan, who has worked for Bede since 1965, and Bede trustee Tina Stanley. Tina met her husband John when both were living in Bede House in the 1960s and the couple have been involved ever since.

Distinguished concert pianist Catherine Edwards performed jazz music by 1930s composer Billy Mayerl, and Mimi Edwards led the guests in singing “There’ll be bluebirds over the White Cliffs of Dover” as the birthday cake was cut.


The exhibition runs at the Café Gallery in Southwark Park until 5pm this Sunday, August 18 and showcases 100 fascinating black and white photos from the Bede archive which illustrate the changes in the area since Bede House was founded in 1938. Many were taken by celebrated photographer Tony Othen who lived in Bede in the 1960s. Side galleries display more recent images of Bede’s success in helping adults who have a learning disability, and young people from low income families, to develop their potential and play their part in building strong local communities.
Lots of people have told me how this Gala opening expressed the spirit of Bede House perfectly. It brought together people from different background who all support Bede’s work. By the end of the evening, we had a true community atmosphere in the gallery which inspired everyone.

The exhibition, which is sponsored by the Heritage Lottery Fund, is open from 11am to 5pm at the Café Gallery, Southwark Park, SE16 2UA until Sunday August 18. Entry is free, so do come along if you can!
Best wishes,
Nick Dunne

Email ThisBlogThis!Share to TwitterShare to FacebookShare to Pinterest
Labels: Arts and Entertainment

﻿Hands off our watering holes:
Southwark News' fight to save our pubs.


It's a well known and accepted fact that Bermondsey loves downing a drink or two.  But, as two more of our historic public houses are threatened with closure, we may soon be forced to walk or stagger further afield for our daily tipple.
﻿﻿


﻿﻿Thanks to the Southwark News 'Save our Pubs' campaign our pride of local pubs may soon be saved from closure by out-of-town developers whose sole aim is putting profit before heritage.

Backed by Simon Hughes MP, the campaign has already succeeded in having 'The Grange' public house listed this week as a community asset.  The Assets of Community Value (England) Regulations came into force on 21 September 2012.  They define community assets as 'land and buildings owned or managed by community organisations' covering 'a wide spectrum and including town halls, community centres, sports facilities, affordable housing and libraries'.
But, with the St James Tavern up for sale on St James' Road, the battle is far from over.  Selling a range of the finest beers, as well as seafood from its royal blue 'Butchie's of Bermondsey' van, this local treasure faces a fate worse than a stonking great hangover - its redevelopment as posh luxury apartments, similar to those at The Queen's Arms on Spa Road.  Once frequented by dockers and the workers of 'the larder of London', the tavern may soon be unrecognisable to Bermondsey folk: occupied by the upwardly mobile, rather than generations of working-class revellers enjoying a good local night out.
There are of course two solutions to the modern-day problem of the declining pub industry - the 'Save our Pubs' campaign is only one of them.  As with any successful business, loyal and committed customers are the key solution to keeping Bermondsey pubs alive and beating at the heart of our community.  As well as listing and protecting the pubs, we must patronise them in our droves - now, not next week.
Just off Borough High Street, The Kings Arms boasts an impressive royal coat of arms that was originally displayed on the old London Bridge before it was sold off to the Americans.  It is gems such as this that form a key part of our shared history and the Bermondsey local identity.  The closure of these community assets threatens to put in jeopardy over a hundred years of history.
After the merger of Bermondsey  and Rotherhithe Community Councils, against the wishes of many local residents, Bermondsey lost its collective voice.  A Bermondsey Society or parish council would provide a key grass roots voice that could fight to protect our history and identity.  Although Southwark Council rejected out of hand the idea without even consulting Bermondsey voters, representative and inclusive bodies such as these need not divide local politicians on party lines.  What is best for Labour and the Lib Dems is not always best for Bermondsey. 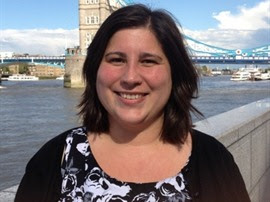 So, we must follow the fine example set by The Walworth Society in SE17 and apply to list all of Bermondsey's pubs as community assets, giving local people the opportunity to buy pubs that are up for sale, and six months to raise the necessary funds.  All that is needed are twenty-five signatures from local people on the electoral roll, beer-thirsty Bermondsey boozers streaming through the front door and perhaps a Bermondsey Society or parish council - power to the people!
More information at:

Let's do lunch... in the Houses of Parliament!

Bermondsey bangers and mash in the Palace of Westminster - bootiful!


Living in London is quite unlike living anywhere in the world, with every new day bringing a fresh set of wonders and experiences.  But, few match a visit to Westminster: the mother of all parliaments, the seat of empire, the home of democracy - and all you need is an Oyster card and a C10 bus.
Crossing Lambeth Bridge, the sight of the palace tower flying the union flag is enough to fill one's heart with elation.  As Millbank approaches, as if in slow motion, memories of the greatest parliamentary moments flood freely through the mind: Margaret Thatcher's defiant last speech as Prime Minister; Dennis Skinner's annual light-hearted jibes during the State Opening; and of course, Geoffrey Howe's damning resignation speech in 1990.  Our parliament has always been at the very heart of the cut and thrust of British political debate.   But, how often does Bermondsey get a look in?
Since Bermondsey Town Hall closed in 1965, and its seat of power was subsumed by the London Borough of Southwark, democracy has shifted further and further away from the people.  Ask anyone down at the Blue Market on Southwark Park Road, and they will tell you how the former Metropolitan Borough of Bermondsey transformed the lives of some of the poorest people in Britain - the ghosts of pioneers past Alfred and Ada Salter shout aloud their legacy from every street corner.  But, did you know that Bermondsey man and woman can follow in Alfred's footsteps and hang out in parliament?
Luckily, Bermondsey Beach had a special invitation this week to dine at one of the many restaurants in the Palace of Westminster, and the menu was surprisingly Bermondsey: bangers and mash with lashings of onion gravy, shepherd's pie, chicken korma and the finest apple and cinnamon crumble this side of South Bermondsey station.   The kitchen even provided free tap water to wash it all down with!  (It is even said that they serve up a damned fine full English breakfast for the early risers - Simon Hughes has probably had one or two over his 30 year reign as MP!).
Now, we understand from the Daily Telegraph, that parliamentary staff enjoy subsidised dining.  But, remember that not everyone who works in the palace is an MP, and even they deserve a hearty meal now and then.  So, how can Bermondsey folk get in on this culinary action?


Well, this man can help!  In his role as our MP, Simon Hughes organises tours of the palace for Bermondsey residents, as well as arranging tickets to watch the lion's den that is Prime Minister's Question Time.  Send him an email at simon@simonhughes.org.uk, and perhaps soon you too will be enjoying exquisitely prepared Bermondsey fayre alongside the spirits of Churchill, Bevan and Lloyd-George.  Now, that's democracy in action!

The greatest parliamentary speeches of all time:

http://www.theguardian.com/politics/2009/apr/06/greatest-speeches-in-parliament-of-the-past-100-years
Posted by A View from Bermondsey Beach at 17:25 No comments: Links to this post