As the television advertisement goes: ‘I love horses, they’re my friends!”  It is true that horses have a proud tradition in serving the people of Bermondsey and are well loved by many in the area.  Farmers of old used to leave their livestock in the surrounding Bermondsey fields.  Back in the 19th century when Samuel Bourne Bevington and other entrepreneurs were using horses to transport the leather and other goods produced in their burgeoning businesses, Bermondsey would have been used to the comforting sound of horse shoes on its narrow cobbled streets.  Today, local people still use horses, giving them pride of place at the front of funeral processions, or less often for pulling along horse-drawn carts.  Yes, Bermondsey loves to stroke, ride and admire horses; it does not expect to eat them! 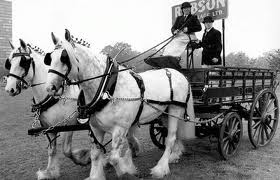 ﻿
Of course, there is nothing intrinsically wrong with eating horse meat.  The French do it and so does most of Europe.  However, the recent discovery by the Food Standards Agency of Ireland that some Tesco and Aldi beef burgers contained 29% horse meat is nothing short of an absolute outrage!  Once again, this is an example of less well-off individuals suffering through being served sub-standard ‘value’ products.  It is perhaps equally as worrying that without the horse meat, so called ‘economy’ beef burgers must by law contain a minimum of only 47% beef.  So hang on a minute:  less than half of the average ‘economy’ beef burger actually contains beef?  I’d like to see the farmers at the Bermondsey Square farmers’ market try and get away with that!  Its oh-so discerning patrons would be up in arms with disgust!  They would turn their backs on the market, taking elsewhere both their trade, and their organically-produced jute shopping bags. 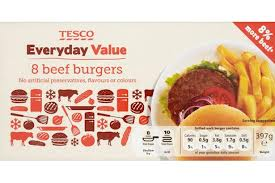 Bermondsey Square farmers’ market is one of the jewels in Bermondsey’s multi-faceted crown.  Together with the excellent nearby Maltby Street & Spa Terminus markets, they are superb places to purchase food and other produce manufactured to the highest possible standards; they are helping put Bermondsey back on the map.  Their burgers and sausages contain nearly double the amount of meat than their economy cousins.  Browsing, choosing and buying are aspects central to the experience of shopping in these community spaces.  These markets are places to meet friends old and new, make contacts and most importantly buy healthy, clearly labelled food.  The problem is that they are effectively gated-communities that exclude the majority of local residents.  Indeed, the right-on inclusivity that their predominantly middle-class professional patrons so highly prize is noticeably absent from these and most other farmers’ markets up and down the country.  These markets are poorly advertised and as such, are only discovered on the middle-class grapevine, or through a chance passing on the way to the supermarket.

Ordinary Bermondsey residents are literally priced out of the market!  Yes, they can browse and perhaps treat themselves to a small black coffee, but they could not stretch their valuable weekly shopping budget to buying the kinds of foods that their families really need: well-made produce with the best ingredients.  If they could join in this game of farmers-in-the-city, Bermondsey folk would be as sure as they could be of buying ‘what it says on the tin’, without additives, nasty chemicals or horses:  their children’s health might even improve as a result. 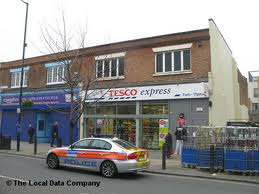 Why should ordinary, respectable people have to put with such uncertainty around the content of their food?  It’s horse meat in burgers today and something potentially dangerous tomorrow.  This is discrimination and exclusion on a massive scale.  Why can’t the Tesco supermarket on Southwark Park Road provide economy burgers, fish fingers and the like with the highest possible content of meat or fish?  The pricing argument does not wash, as this super-corporation made a mammoth £2.5bn profit last year: some of this should be ploughed back into improving people’s diets, opening up good food for all.
Perhaps as they meander through the farmers’ market buying Bermondsey cheese and other locally produced products, the patrons could spare a thought for those on lower incomes who have to survive on a daily diet of value and economy products.  These innovative local markets should be opened up to all, with lower or subsidised prices and better advertising to welcome the whole community.  A greater variety of stalls offering good food at a range of prices would be a sure way of promoting inclusive values. 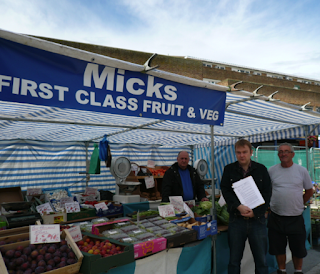 Ordinary people still have limited choices over where to buy the best food.  But, at least the remnants of a once thriving working-class fruit and veg market remains at ‘The Blue’ – and they don’t sell horses! 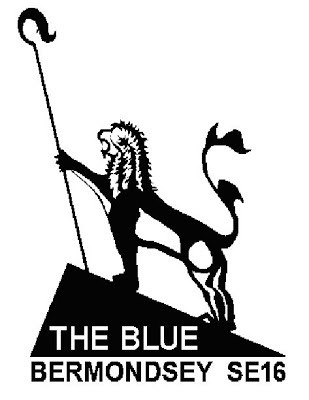 Posted by A View from Bermondsey Beach at 17:38 2 comments:

"'Ello, 'ello, 'ello!  Would you like a latte while you report your violent street mugging?"

As absurd as it may seem, these could be the very words uttered as you enter ‘Al’s Café’ on Bermondsey Street to report a crime committed within the Borough of Southwark. Although this may seem like a joke taken straight out of a 1960s Carry-On film, this could be the frightening reality of new cost-cutting proposals put forward by the Deputy Mayor for policing at a consultation tonight in City Hall. 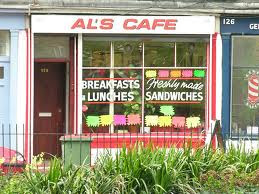 Officially, the idea is a new way of improving policing in Southwark and London in general by finding ‘creative solutions and alternatives’: so says Stephen Greenhalgh deputy mayor, who states that no police ‘front counter’ will close unless a suitable alternative has been found. Budget cuts notwithstanding, why close them then? In practise, the ‘Your Police Your Say’ consultation is seriously considering closing three front counters (read ‘police stations’ in your ‘Bermondsey Real English Dictionary’), and replacing them with pop-up sites in cafés, supermarkets and post offices. Imagine for a minute, suffering as a victim of crime at Bermondsey underground station. Instinct and common sense tells you to either call 999, 101 or find the local police station: it does not point you in the direction of ‘Rose’s Café’ on the Dickens Estate. This ridiculous move forms part of a barrage of ‘creative solutions’ that range from the sublime to the plain ridiculous! 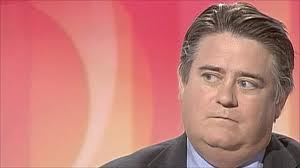 ‘Creative solution’ number one: Reducing spending by 20%.
How can one reduce Borough police spending by 20%, and at the same time ‘cut 7 priority crimes by 20%’? As one local secondary school teacher put it, “The local gangs must be rubbing their hands together thinking ‘It’s Christmas’!”.

Quite frankly, this is absolute balderdash!  The good old fashioned British police station is more than a building. Southwark’s six stations are for many akin to beacons of hope, safety and security. They tell us where to go when we need help. The psychological effect on the community of removing three stations cannot be measured. Interestingly, the Mayor’s office for policing and crime believes that the package of proposals will ‘boost public confidence by 20%’. Can someone explain this, please?

The Mayor plans to deploy 1200 more officers in all London boroughs, so why only two for Southwark? As areas bordering Bermondsey such as Camberwell and Peckham are particular crime hotspots, how does this ‘solution’ achieve the plan’s objectives of being ‘visible’ and ‘accessible’?

The consultation was not a consultation by the standards of ordinary Bermondsey folk: the decisions have already been made. This was a farce, a box-ticking exercise, by politicians and officers who value their jobs more than their principles. Did the three local MPs, who are paid to speak against such nonsense, express concisely and directly their opposition to the plans?  You bet they didn't.  And, how did the illustrious parade of councillors fare in standing up for a better Bermondsey?  You guessed it, they rambled-on with the classic 'I've got three points' statements, none of which were memorable, all of which might as well have agreed with the plans.  This was an outright middle-class-muck-about, where backs are slapped and politicians and residents alike acquiesce in a dangerous destruction of a well-loved institution.

So, the deputy mayor got his way.   Not unusually for a politician, he became quite dismissive and did not address directly the views of local people. It’s as though he thought that this was not the place for hearing the views of local residents who oppose what he had to say. After the meeting, Mr Greenhalgh was heard to accuse a local resident of 'being difficult and causing problems' for merely expressing a view!  Local politicians had more to say than local residents, which is worrying: perhaps this is because the meeting was so poorly advertised. If you want to hear the views of real Bermondsey residents, sometimes you have to employ 'creative solutions' to find and then listen to them. Where was the bulldog Bermondsey spirit?  Walled-up at home, caring for the children, that's where it was!  It didn't help matters that residents had to register online to attend, and stay out so late. 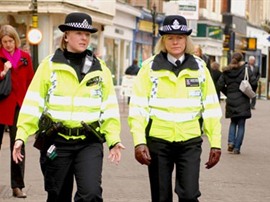 What are the real solutions? Well, policing matters are for the police to address without budget cuts framing the discussion of ideas and solutions, but here are a few ideas:
1. Put the proposals to the test as part of a local referendum
2. The deputy mayor could start by knocking on the doors of local Bermondsey residents to find out whether they agree with his proposals. Bermondsey folk are quite honest and direct: I suspect that he would not really want to hear what they had to say.
3. The ‘consultation’ could be taken to the people in schools, colleges, community halls, youth centres, shopping precincts and tenants and residents halls. One of the most interesting comments came from a local teenager living near the Aylesbury Estate, who expressed concerns about policing in the area and a fear that the proposals will do nothing to foster a sense of security in his area.

4. The proposals could at least be honest in saying that the ‘reorganisation’ and station closures are due to cuts, rather than fresh, new ideas with the sole purpose of improving policing. The aforementioned teenager expressed a widely shared view that nothing will change because nothing ever does.
5. More police officers have to be part of the solution – two would be perfect for Bishopbriggs in East Dunbartonshire, but is woefully inadequate for inner-London Bermondsey.

6. Advertising for officers and special constables from ethnic-minority communities, so that the police service reflects accurately the local population. This was a view expressed by MP Harriet Harman and is one that makes sense.

7. Maintaining the ‘front counters’ in all six borough stations and taking the police presence to the people, e.g. by setting up road shows and events in prominent public places including schools and colleges

8. And, if it does all come down to cuts, perhaps the deputy mayor could argue for an increase in the council tax precept to offset the 20% budget cuts: now that is a policy that people might pay for. 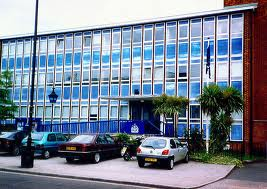 Bermondsey residents are proud to live in such a vibrant part of London.  We want our politicians to be open and honest with us, rather than pretend to listen to our views and then go ahead and do what they want anyway.  We are proud of our country, our community, our area and our police force.  We want the police to continue to keep us safe: these proposals threaten this.

I'm of to Al's Cafe tomorrow: his fish and chip suppers are to die for!
Posted by A View from Bermondsey Beach at 00:11 No comments:

A View from Bermondsey Beach:

Posted by A View from Bermondsey Beach at 15:18 1 comment: